An interesting and constructive Conference on the Wolves’ Path 2.0 was held at… Savelli Castle in Palombara Sabina!

Goodbye to the group of Emilian Wayfarers 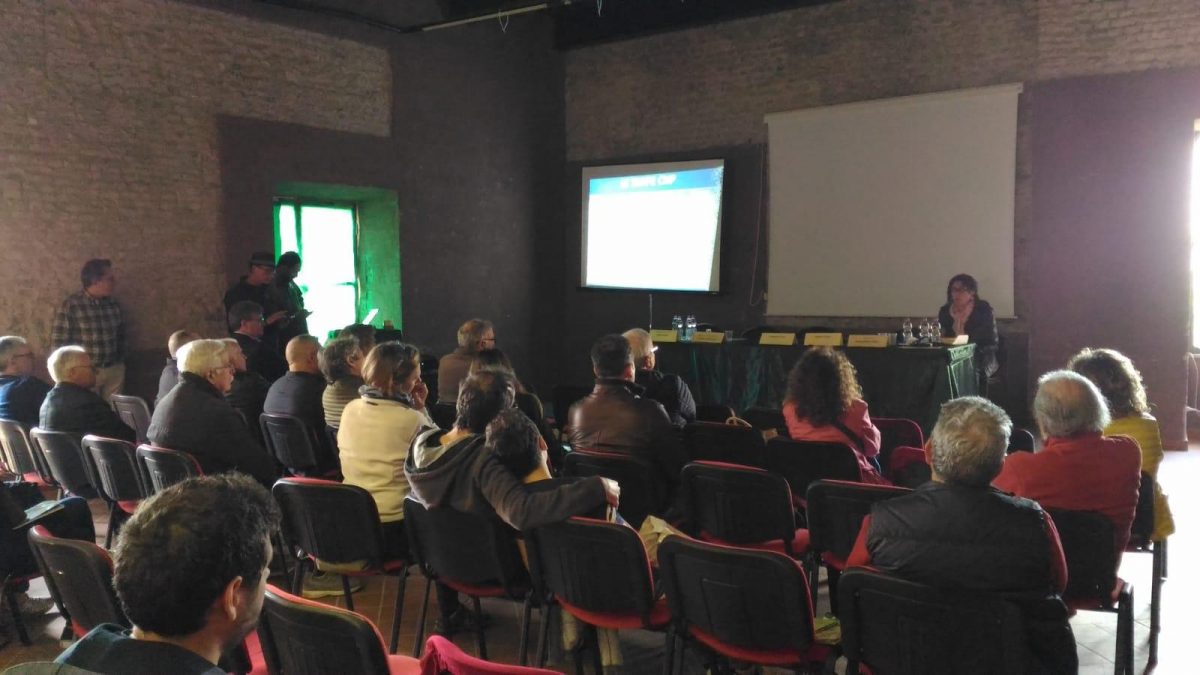 Saturday 11th of May, the Park of the Lucretili Mountains held a conference to promote the Wolf’s Path 2.0. at the beautiful and panoramic Savelli Castle in Palombara Sabina.

The schedule of interventions, very substantial and of high quality, dealt with both themes closely related to the wolf and themes of a more promotional kind, including the direct testimony of some excellent hikers, that have done this trek in its entirety or for good part of it!

A meeting opened by the greetings of the Mayor of Palombara Sabina, Alessandro Palombi, and by the President of the organizing Park, Barbara Vetturini; immediately followed by the Director of the Park of the Lucretili Mountains, Laura Rinaldi, who introduced the technical-experiential relations, with a broad reflection on both the quality actions that may arise from an ever greater synergy between neighbouring protected areas, connected from time to time by different narratives and themes, and on the important opportunities that these actions can / should have as an effect on hospitality and slow tourism for the areas concerned.

Noteworthy was also the presence, for the entire meeting, of the President of the National Park of Abruzzi, Latium and Molise, Antonio Carrara, an attentive listener.

The following two speakers, Paolo Ciucci and Valeria Salvatori, have, from slightly different points of view and gradually, led to reflect the audience on the different and complex relationship that in recent years is increasingly emerging and influencing the connection between us, human beings, and wild predatory carnivores. They also explained some interesting and indispensable methods of mitigating the socio-cultural contrast, which for at least a decade have been used in some often “restless” territories.

Following and turning the page, Daniela D’Amico stimulated and involved the onlookers guiding them in the thought how to strike the right note to reach the most effective and harmonic communication of any network, in this case composed of protected areas and hospitality and tourist operators.

With Alessandro Piazzi and Angelo Maria Mari, the beauty of the protected areas that are crossed and the numbers of the all-round trek have been explored.

Last but not least, indeed (!), two wonderful walkers let us enter into the heart of the adventure, telling us the joys and sorrows they received from travelling along the Wolf’s Path for several days.

In order, Claudia Errico, who at the height of summer, together with a friend, Sara Carallo, have travelled 6 rather central steps of the trek giving a very “social” interpretation supported by vivid reports on the media, have managed to fill a certain lack of knowledge and unawareness that existed before their passage around the Wolf’s Path. Invaluable and captivating!

With Alessia Cella, on the other hand, the story was much more intimate, reflective, with herself and Nature. A solitary woman, at the beginning of spring, enriched by the search experience of Spartan shelters at high or low altitude, who showed all the tenacity and inner transformation that a path of many steps implicates. Humble teaching to learn!

Finally, like a beautiful and unexpected surprise, Enrico Di Cintio, of the Cai Section (Italian Alpine Club) of Valle Roveto, who, with great fervour for places of origin, fascinated us with the reading of a small great poem by the Panamanian Rubén Blades Bellido De Luna.

An encounter that grew as the testimonies followed one another, leaving a pleasant good feeling of understanding that is always stronger.

In short, leaving the castle, we had a certain awareness of something that will be both a harmonious memory, and a start for new ideas and concrete actions in favour of this fabulous trek in steps!