CONGRATULATIONS, Alessia! You finished the of the Wolf’s Path 2.0!

Going slowly, finding calm and balance: going into to be transformed by it

We support and promote the renewal action, by the CAI of Val Roveto, of the Civita d’Antino Refuge 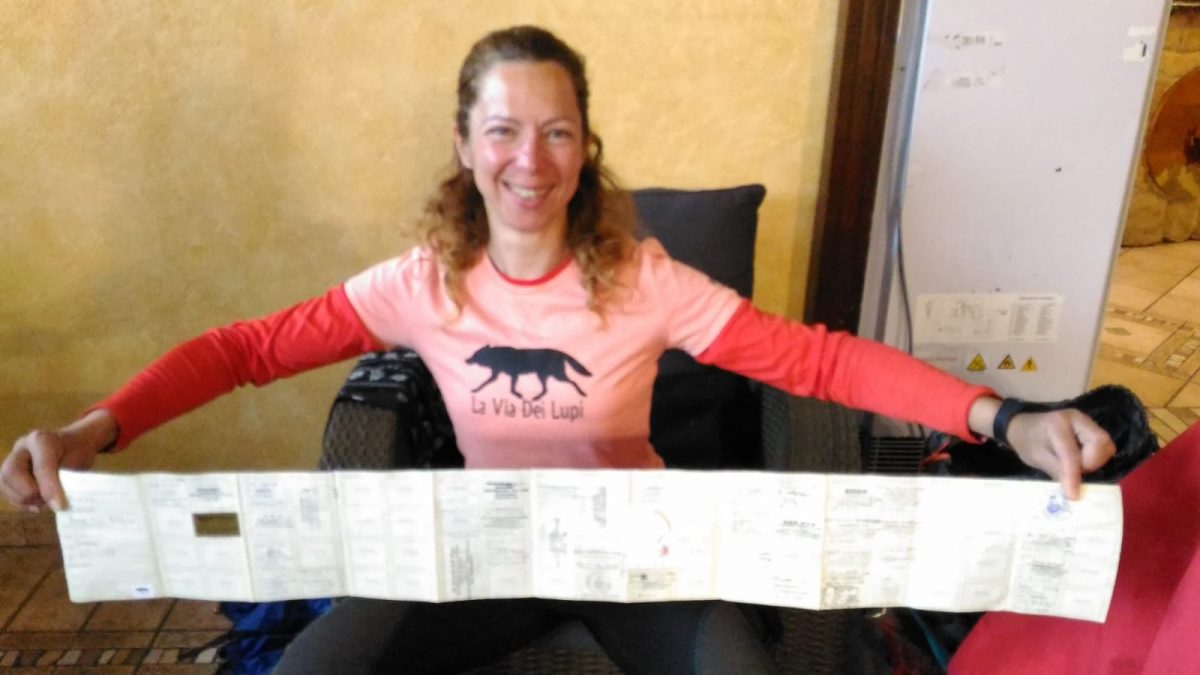 I greeted you and saw you leave with a firm step, on Wednesday 3rd  April from Tivoli.

You stopped, for the first stop, in Licenza, joining the first two steps.

The following morning you could not get away from the village because of the curiosity you aroused and the desire of people to tell you something about their stories, which are partly related to the path, to wolves.

Two more steps, up to Cervara di Roma, with the first intense rains and painfull knees. The precious aid arrived and everything was soothed!

New day, new early morning departure, two more steps together, or more precisely, one and a half. First night in a shelter, the one of Fondi di Jenne … maximum test for senses and psyche. Marvellous …

It was Saturday 6th , breakfast in Jenne and then off to Trevi nel Lazio, which you would reach in the afternoon after a quite challenging descent and climb.

On Sunday, because of the bad weather, you could rest and visit the village, all the way up to the top of  Torre Caetani … very panoramic.

Monday was the day of the administrative, physical and mental division; with step number 8 that had the most challenging numbers!

The day, beyond any forecast and expectation, was splendid and arriving at La Grancia in the evening, near Morino, you did not find the words to describe the beauty that you had admired and that had entered into yourself…

… you could only pronounce a tearful Thanksgiving to Nature!

A thanksgiving in itself well worth the effort made to get to the half way point.

The following day, a second night in the mountains awaited you, in another shelter, but before isolating yourself voluntarily from beeches and wolves at about 1500 m, you met wonderful people like Mariella and Gabriele! If the world were more densely populated by people like them … it would be a dream!

Numb from a freezing cold night, you started heading quickly over the 10th step, with final destination Villavallelonga, the first village in the area of ​​the historical National Park. But first you were lucky enough to visit the Church of Madonna del Monte and to enjoy a hot dish in Collelongo. Well deserved.

Thursday, after the splendid Prati d’Angro and a short hail of welcome in the park, you arrived so early in Pescasseroli that you could visit it in the afternoon. The climate, from this day, would not leave you more than the morning to enjoy the sun… it honored you, too, with a suitable weather… for  wolves !!

On Friday the 12th, after a stop, which pleasantly surprised you, arrived at the beautiful village of San Donato di Val Comino, you were welcomed by the mayor and “cuddled” until late evening by the immense hospitality of Elisa!

Restorative dinner and night were necessary, you were going towards the last two days, with rain, snow, trees across the paths due to the winter winds, and a night in the third Spartan shelter, this time in the long Val Canneto, but let’s proceed by order …

…. Before entering alone into the valley, which is the beginning of the last step (the 14th step), the village of Settefrati greeted you with joy, starting from the mayor.

And today, what a coincidence; I am writing and WhatsApp rings sending compulsive messages, announcing that, EUREKA, you are reaching Civitella Alfedena … it’s almost half past 3 p.m.!

I have a lump in my throat …

I am over-excited … as are all those who are following you in your almost epic adventure, which recalls past times!

For the many meetings and videos you posted, it has been 12 days that have expanded over time …

We will await the gift of your story …

The wolves having observed and always followed you, in groups, congratulate you, and who knows how many of their territories you have crossed in these almost 200 km on foot for a beautiful part of the Central Apennines.

WE WISH YOU PLENTY OF HAPPINESS, ALESSIA