Resettlement in the central and eastern Alps: a window on the coexistence to research

Surprising discovery in Canada: unearthed a mummified and well-preserved wolf pup of over 50,000 years ago! 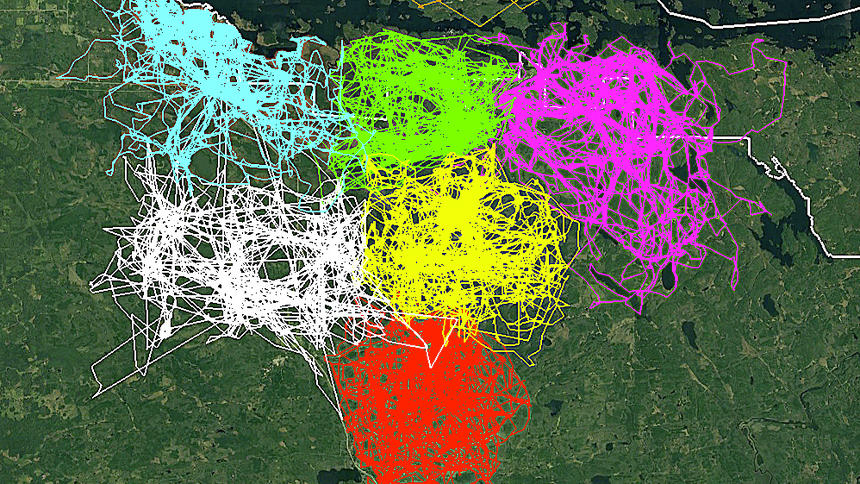 Within the Voyageurs Wolf Project carried out by the University of Minnesota and the Voyageurs National Park, researchers studying the 6-8 packs living at least in part of the park’s territory have collected last summer an important amount of data from GPS radio collars put to 18 of the 30-40 estimated wolves in the same packs.

Mapping the GPS roads transmitted by radio collars of only 7 wolves from different packs, for a total of 68,000 precise locations recorded every 20 minutes for the duration of the entire summer, an incredibly  clear type of interaction emerges, indeed, between packs of neighbouring wolves; almost inexistent!

Wolf packs almost completely avoid each other and the coloured skeins above show their respective home-ranges and clear boundaries, invisible to people. Borders that could sometimes coincide with rivers and lakes, but more often it concerns odorous borders created by the wolves themselves.

Thus, with a single coloured image, it becomes clear and easy to tell and to understand what the TERRITORIALITY represents for a pack of great predators such as wolves.

Still within the same project and with the same data of the radio collars received, yet, by a single pack for a number of years, starting in 2014, the variation of territorial boundaries and their extension are clearly estimated.